The Climatic Research Unit (CRU) was established in the School of Environmental Sciences (ENV) at the University of East Anglia (UEA) in Norwich in 1972.

The CRU has collected, collated and archived global climate data for over 40 years.

In 1987, the American Meteorological Society published a paper by Stanley Grotch of the Lawrence Livermore National Laboratory, University of California, that assessed the robustness of the CRU dataset for land and other datasets.

Three data bases of gridded surface temperature anomalies were used to assess the sensitivity of the average estimated Northern Hemisphere (NH) temperature anomaly to: 1) extreme gridpoint values and 2) zonal band contributions. Over the last 100 year, removal of either the top or bottom 10% of the gridpoint anomalies in any year changes the estimated NH average anomaly by 0.1−0.2°C. Excising extensive zonal bands also produces root-mean-square changes in the estimated NH anomaly of approximately 0.1°C. The estimated NH average anomaly appears to be robust to such perturbations.

Grotch cited the paper by Jones that described the land and ocean datasets: A new compilation of monthly mean surface air temperature for the Northern Hemisphere for 1851-1984 is presented based on land-based meteorological station data and fixed-position weather ship data.

Grotch’s paper claimed that the land (CRU) and ocean (COADS) datasets pass his tests of normality and freedom from bias. His presentation is reasonable.

(Unfortunately, Grotch’s paper seems to be no longer accessible even via Google Scholar.)

However, his Figure 1 shows 26,000 data points for thee Nothern Hemisphere (NH) that range between plus and minus 2 degrees Celsius . By contrast, the signal (the mean temperature) ranges from approximately -0.2 C to +0.2 C over a period of 130 years, a rate of about 0.3 C per century.

The question arises: What is the standard error of the estimate? How much confidence can be placed in the vertical location of a point on the black line when the data range is ten times greater than the signal range? We do not know.

The NH temperature increase from 1885 to 1940 was about 1.0 C, about double the increase over the period 1851-1984. The biggest change in temperature was before 1950, when CO2 began to be emitted at modern levels.This rise in temperature by 1 degree C cannot have been man-made climate change, but merely a natural fluctuation in temperature.

The lowest average temperature in the NH was around 1875. The periods 1875-80 to 1935-40 and 1935-40 to 1995-2000 are both 60 years, approximately the same as the period of the Atlantic Multidecadal Oscillation (AMO). However, we do not know how much of the temperature change on land observed during the last 120 years was a natural response to oceanic oscillations, including the AMO.

Since no warming was observed between 1940 and 1980 and since little or no warming has been observed since about 1995-2000 (apart from El Ninos), the 15-year period from about 1980 to 1995 is our strongest,  and perhaps only, evidence for a long-term trend towards global warming.

But if the warming from 1980 to 1995 was related to the warm phase of the AMO, then we can expect, first a peaking in the cycle, and then a gradual downturn in the AMO, which may have already occurred but has been masked by El Nino events.

The temperature of the sea itself is not shown. Until the Argo system began to be deployed in 2000, oceanographers had to rely on ships at sea to measure the temperature of the world ocean. The ocean covers 70% of the Earth’s surface and the thermocline extends to a depth of about two kilometers. Thus, most of the heat in the biosphere is stored in and released from the ocean.

Nevertheless, the CRU did produce annual estimates of global average temperature using a combination of land and the sea-surface temperature (SST). At the time Grotch prepared his paper world use of fossil fuels was also known.

It would have been possible to raise the issue raised by Klyashtorin and Lyubushin in their paper On the coherence between dynamics of the world fuel consumption and global temperature anomaly. 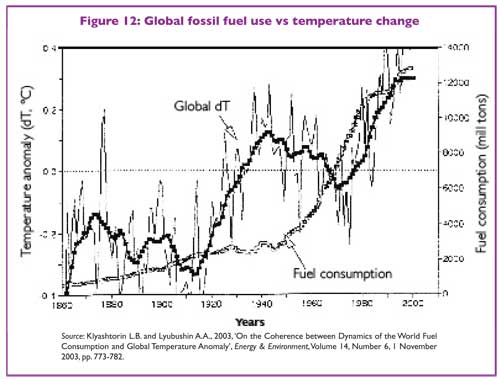 The graph compares fossil fuel use worldwide over about 140 years including those covered by Grotch’s paper. As I recall from the paper the correlation coefficient between fossil fuel use and global temperature change was given by r = 0.3. The coefficient of determination (r-squared) was about 0.09. This indicates that variance in fossil-fuel use accounted for 9% of the variance in global average temperature.

On this flimsy evidence, in 1992 a vast world-wide initiative was started with the aim of regulating the temperature of the Earth. United Nations Framework Convention on Climate Change.

The publication in an obscure minor journal of the AMS effectively buried Grotch’s paper until Richard Lindzen displayed his graph of CRU temperature in his lecture,

Devoted to all aspects of Earth science and ecology

Watts Up With That?

The world's most viewed site on global warming and climate change

Cutting edge science you can dice with

Breathing on the embers of a dying Republic.

NOT A LOT OF PEOPLE KNOW THAT

Devoted to all aspects of Earth science and ecology

The Art and Craft of Blogging

The latest news on WordPress.com and the WordPress community.